Saturday May the 12th started very early for us, again. But since sunrise happens just after 4am, the first beams of the morning sun accompanied us as we loaded the car, making sure not to forget our trail running shoes – which has obviously happened before.

Sleeping bags, mattresses, climbing gear and a mini-grill loaded, we picked up Mirjam and Des from the tube station. it’s always impressive how cheery they can be at this time of the morning, especially considering they had had to wake up even earlier than us. A three-hour, coffee fuelled drive down to Dorset brought us to the race course.

The atmosphere was buzzing with neon-dressed runners, spectators and dogs. Big queues formed where the smell of coffee and home-made cakes called. And so were pre-race nerves, because the queues for the toilets were just as long! 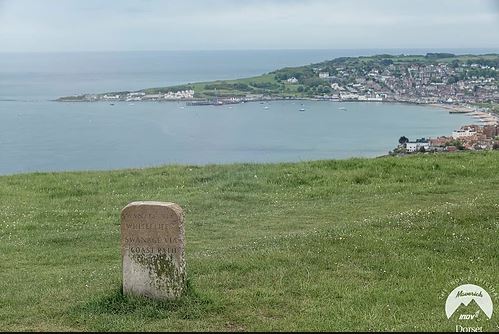 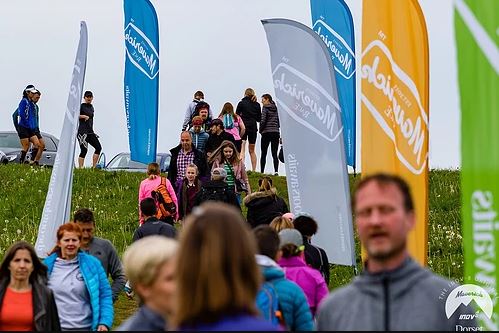 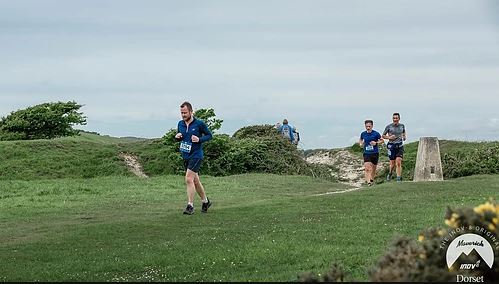 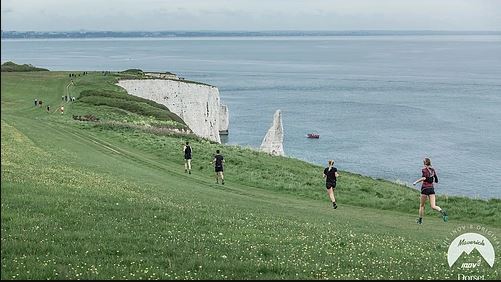 We were lucky to have Yaz with us, he and Des were our support team today. Unfortunately, Des couldn’t race this time due to a sprained Achilles, so he loaded us with priceless advice and race strategies instead. Yaz took us through important pre-race stretching – glute stretching is always number one – and we all got our bums ready for our little run around Dorset.

Ben, the event’s organiser, held us off at the start line in what felt like a fully planned manoeuvre to rise the excitement to unbearable levels and, maybe, give a chance to those still queuing for the loos to come back.

Straight after the start we faced the usual uphill climb which, this time round, was less nasty than the one we ran up in Somerset. After losing our first pair of lungs and getting into a comfortable steady pace, we faced another hill with a horrendous tail, which reduced the super-hyped runners into walking pace. 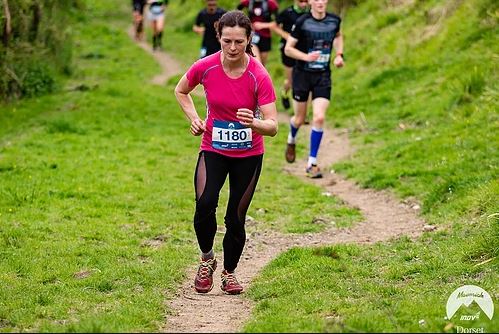 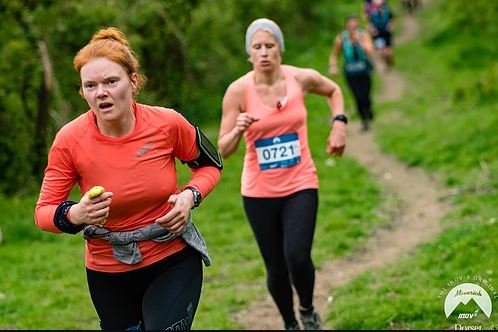 The trails we followed were marked by erosion and thousands of steps on spiked shoes, and around us we admired the white limestone formations so typical of Swanage and Portland climbing spots. Glimpses of the sea were our rewards and the running felt a lot easier now. The second half of the race was flat or back down to Earth.

Mirjam and Jakub, friends in real life, were rivals on a battlefield during the race, with Mirjam on the front for most of the course. Yet Jakub managed to overtake her in the end in a very close and thrilling contest. Lenka had her “fight” too, being left behind by Georgie Lambert and her four-legged friend on the first hill. The pair were incredible and let most of the race, just behind the elite guys. After a hard fight, Lenka eventually managed to beat them, yet the sound of the dog’s tongue never left her heels. Amazing work there on their part!

In any case, the best thing after a Maverick race – and we’d go as far to say it maybe is even sweeter than victory – is opening your can of Maverick ale. It never disappoints. 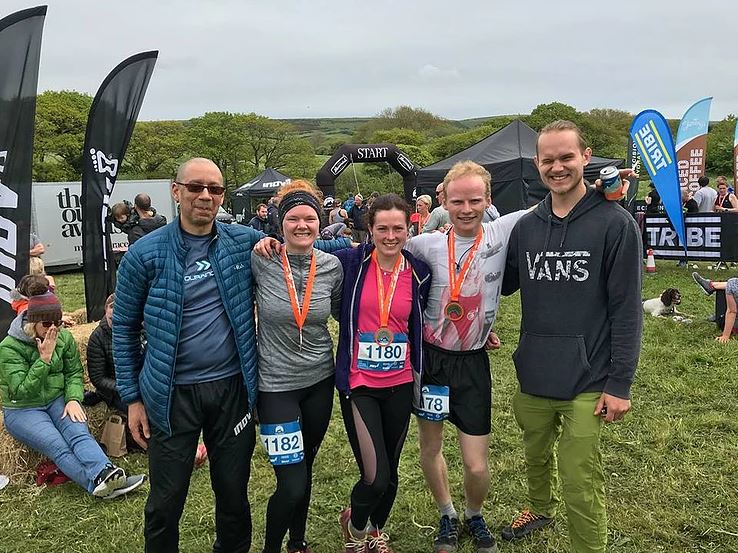 We loved chatting with fellow runners and had a very sophisticated talk with the Maverick Race Series organisers about Inov-8 trail running shoes from various seasons. In the end, for the Maverick 9kms, Lenka won the women’s race for the second time in a row and finished 5th overall. Mirjam came 3rd women’s and 10th overall and, as for Jakub, he finished 5th in the men’s and 7th overall.

But we had more plans for our trip to Dorset, and the race was only a half-a-day affair in a weekend packed with wonderful experiences. After returning to the finish line we headed to Swanage to do some rock climbing. We all took it easy, as recent injuries or the fact that we hadn’t climbed for a while were obvious. Still, we had an amazing time. 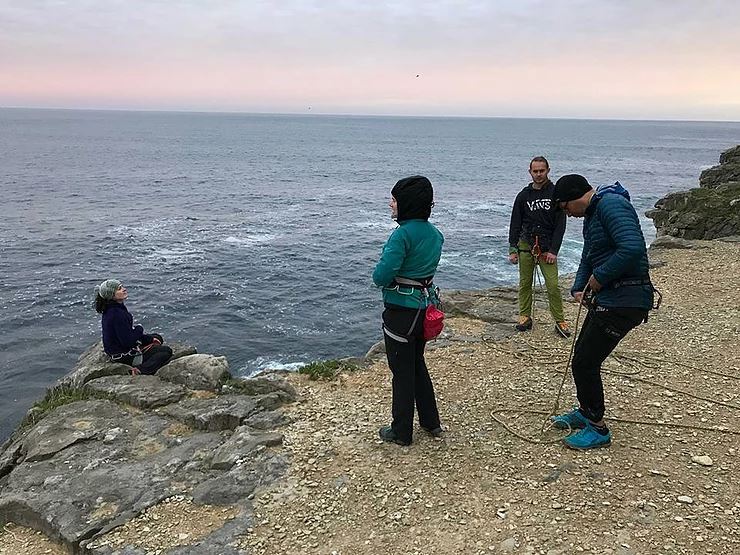 The evening BBQ got us full and ready for the Kings Head pub, were we learnt that people from Langton Matravers know how to party. Under the influence of groovy Jamaican sounds we danced in the beer garden; stars were bright and there was no sig of rain. Going to sleep after a full-on day like this was beautiful.

The day after carried on in the same way, and it was sad to leave the brilliant blue sea and polished footholds behind. However, we took the memories with us in the form of sunburns, sore calves and bruised wrists – it was all worth it! 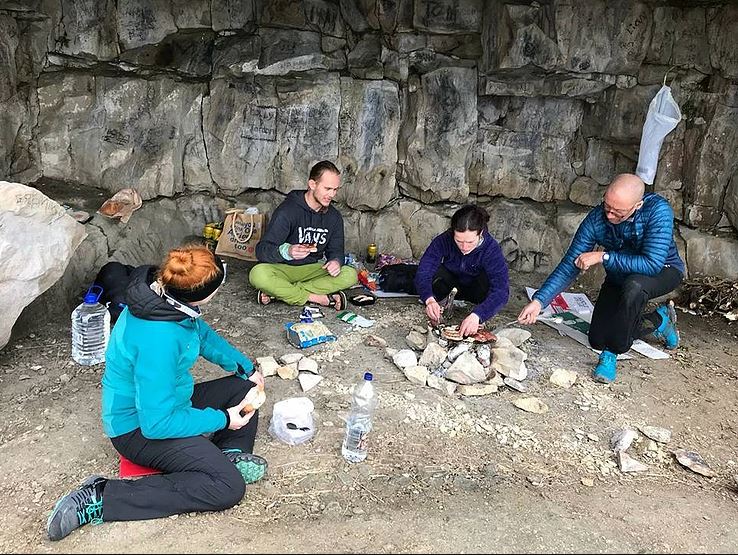 We can’t wait for the next Maverick race and the great experiences that come with it. Thank you to everyone involved!