RedBull K3 – Challenging the steep that landed me at 3,538m

There is a that moment, sometimes the day before, sometimes just minutes before the start, when what you signed up for downs on you, and the nerves kick in. When you take a leap of faith because you’re stepping up your game into new heights.

The Red Bull K3 in Val de Susa, Piedmont, Italy, was my first experience of a Vertical Kilometer (VK) race, and it happens to be the only one in Europe involving more than 3000m of ascent. In short: this is the toughest VK I could have signed up for. 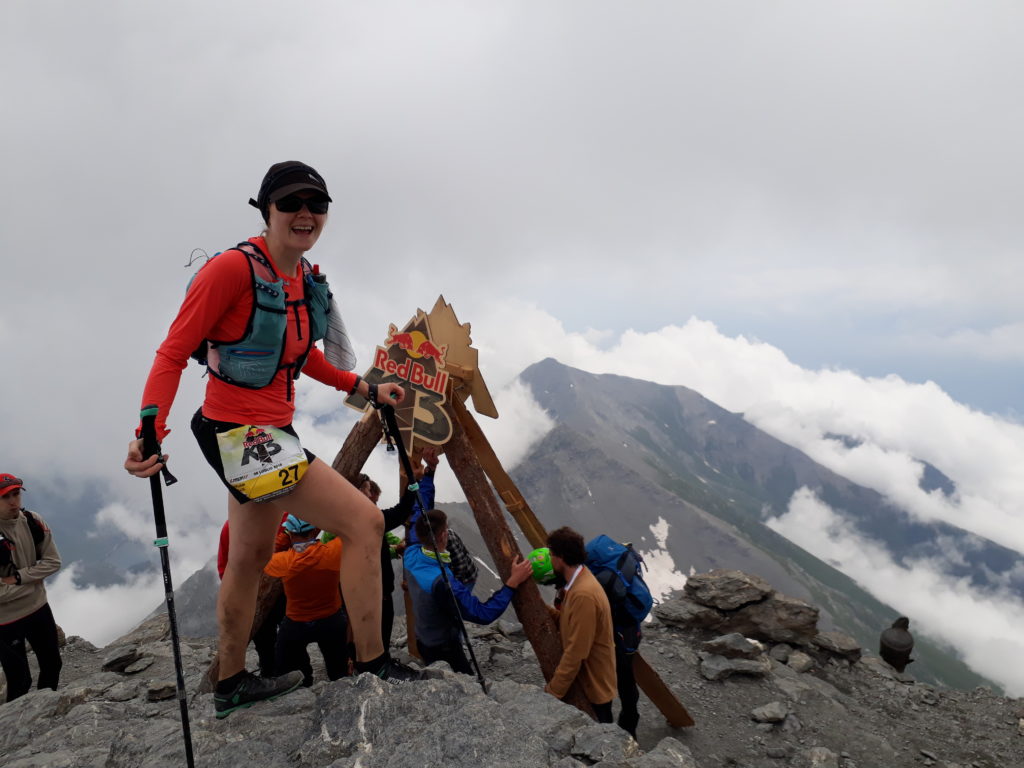 I knew that running nothing but uphill would be a huge challenge for me, not to mention doing it at high altitude. Whilst Lenka took part in the Salomon VK race in Scotland last autumn, and had warmed up nicely at the Salomon VK race in Canazei, Dolomites, just the week before the Red Bull K3, I was thrown into the deep end. Yet even having a little more experience in the VK scene, the Red Bull K3 felt like a new beast altogether for her as well.

Many runners question the amount of training and preparation that has to be done before a race. It’s only natural to wonder if you have trained enough, been eating right, or how you are feeling on race day. This past winter I have been seeking help from physiotherapists to overcome knee pain. Therefore, I have focused on short distances and taking it as it comes.

Having participated in a few Maverick trail running races, which were great fun, provided me with some vital hill training as well as more confidence on rugged terrain. Being a Londoner it’s a real challenge to find hills to run, or to get away from paved roads and paths. 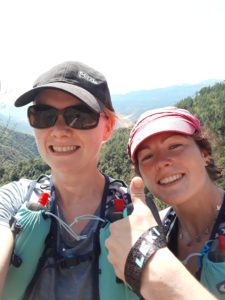 By the time I decided to throw caution to the wind and sign up for the Red Bull K3, I had already booked up my whole summer with various trips the months before. A cycle tour in the Netherlands followed by a 300km hike of El Camino in Spain, which started well but ended with blistered feet, a fever from a throat and sinus infection and a loadfull of antibiotics. This was mere weeks before the race, I did not feel confident, but at this stage I was committed and knew I’d give it a go.

The evening before, the town of Susa felt very lively and every third person we met looked like a potencial race rival; that is, incredibly ripped. This turned out to be true, we saw those familiar faces at the start on Saturday early morning, including Victoria Kreuzer, who had just won the Dolomyths VK only a week before.

We could feel the dense atmosphere, runners doing their last minute stretches and the sun slowly starting to burn. To avoid going mad, Lenka and I compared our kit to that of our fellow racers. We were extremely happy with our equipment, which we got thanks to the generous support of Ellis Brigham Mountain Sports. We were both provided with Leki Micro Vario Carbon Lady poles and Ultimate Direction Women’s Ultra Vesta, and Lenka rocked her new Salomon Lightning WP jacket, which was a part of the mandatory kit. We were sure about the quality of the equipment having had done a trial hike to test it out a couple of days before.

After setting off from Susa’s city centre (at 500m altitude), we ran 2km through town before we got to the path that never stopped going up. The pro runners went off at a sprinting speed, soon not to be seen again. I wanted to pace myself, so hung back and kept to a comfortable speed. When we got onto the path that started ascending, most slowed down into a fast hiking speed, getting into rhythm with the walking poles.

I felt good to start with and overtook a few people during the first leg. The climb was steady and every time I turned to look over my shoulder I could see the city below me growing smaller and smaller. I kept thinking I had gained much altitude, and was wondering when I was going to reach the first checkpoint. Soon thereafter, I passed a sign saying ‘-2500m’, which meant I was only halfway to the first checkpoint. By then, my t-shirt was already drenched in sweat, and I had drank a good deal of my water. It was then it hit me what I was in for.

There were cut off times at both stations. It was both with relief and trepidation that I arrived at the first station – after 1,180m ascent – because I realised I didn’t have much time to spare to the first cut off time. I refilled both my soft pack water bottles at the aid station and carried on.

Lower down the valley was hot even in the early morning hours, and there was no end to how much liquid I had lost in sweat. If I was to make it to the end, I had better keep myself hydrated and energised. Thanks to the wonderful UD Vesta, I was able to drink plenty and kept snacking regularly while comfortably carrying the layers I needed for higher up. 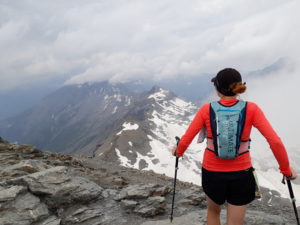 The steepest, straightest grass hill I’ve ever climbed came after a short section that was almost flat. The race course ignored the zig zagging hiking path off to the side and made a straight beeline towards the second station. The few runners who didn’t have hiking poles were crawling up on their hands and knees – it was steeper than a staircase, but with no real steps. The grass was covered in sweat from all the runners before me.

By this point we were at nearly 2000m altitude, I was 8km into the race and faced a gradient of 47% in stages. My legs had turned to jelly. I didn’t have the power I would normally have in them. It felt like the only thing keeping me crawling up the hill were my Leki ultra light poles, which I repeatedly drove into the ground in front of me and dragged myself up using my core while my feet were stumbling underneath me.

I was moving too slow and I knew it, but there was no faster speed available. I was being caught by some of the women I had overtaken in the first leg, and many of the men who had started half an hour after the women. Many other runners were supportive and I kept replying ‘grazie’ to the many kind words of encouragement. 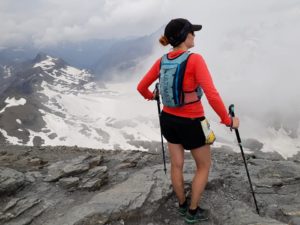 I knew before getting to the second station at 2,830m that I had not managed to meet the second cut off time. I had covered more than 600m of ascent in the last kilometre, and made the 2,330m ascent in 3h 9 minutes, but that was 15 minutes too slowly. I was out of the race. A mixture of relief and disappointment washed over me. I was happy to catch my breath, but of course disappointed that I had not been faster and that my race would end here. I sat down and replenished, swapped my soaked t-shirt for my long sleeve base layer. It was considerably cooler up here, even under the beaming sun.

The ascent had been tough, but I had more left in me. I saw a few other runners carry on up the hill and the odd other hiker, and decided I simply had to see this through if only for my own piece of mind. With my water refilled I picked up my poles and carried on up the scri-like path. The terrain had dramatically changed, and I felt more comfortable underfoot. Later, Lenka said the same. Maybe it is the rock climbers in both of us that feel more secure on rock than grass. 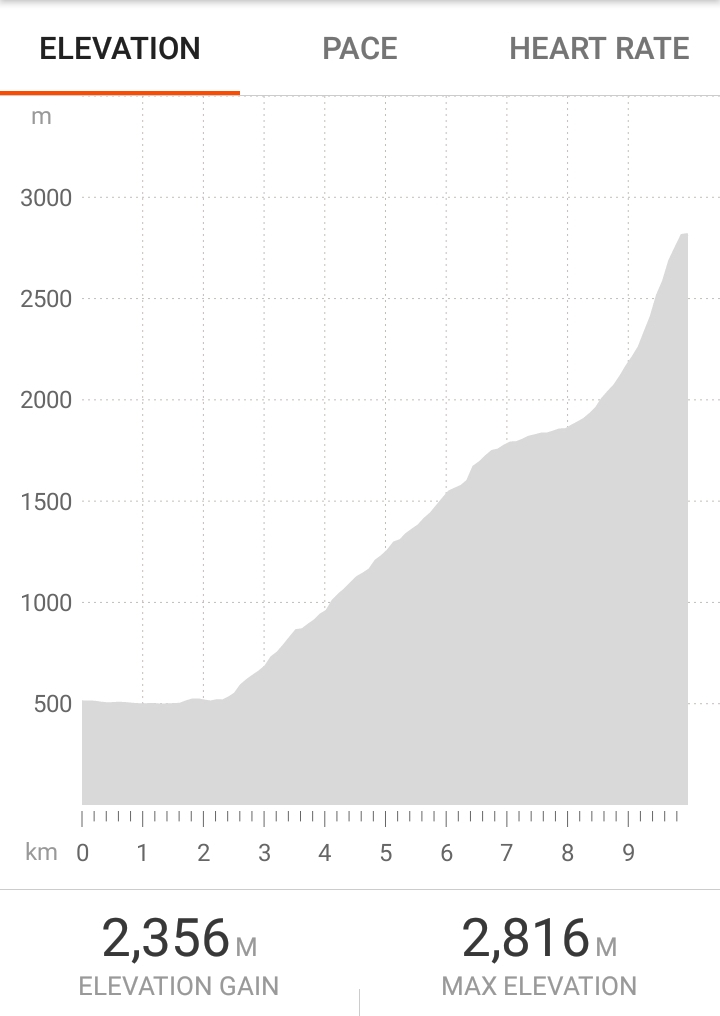 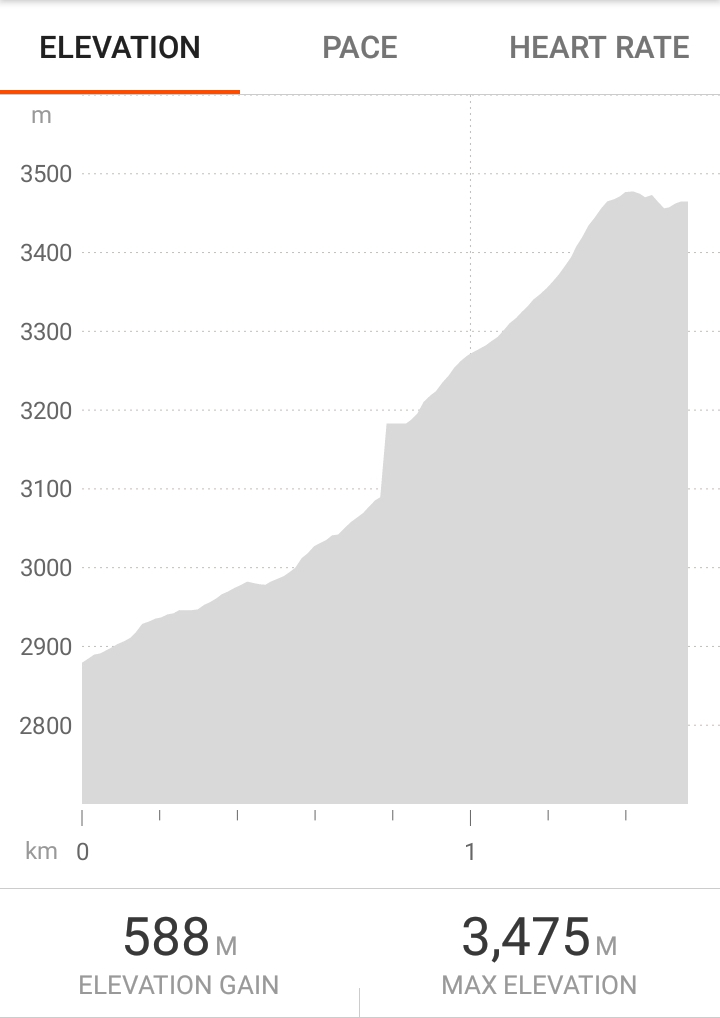 On my way up, I met a steady stream of runners coming down from the summit, and so many cheered me on that I was barely able to catch my breath between every ‘grazie’ I said in response. Trail running is unique in the way of how supportive everyone is of one another. Language barriers or cultural differences don’t mean a thing, we are united by a unique passion.

As I come closer to the summit, at 3,538m, I finally saw Lenka waving at me. I was glad to see she was fine and that she clearly had made it to the top. She decided to turn around and accompany me to the summit! I could not have asked for a more supportive teammate and the gesture helped fuel my last scramble to the top.

Climbing up those last steps and feeling the cold breeze, taking in the endless high mountain tops and snow covered slopes below and around me, was a sight for sore eyes. In that moment I immediately knew I made the right choice in carrying on to the summit. My personal challenge was complete. 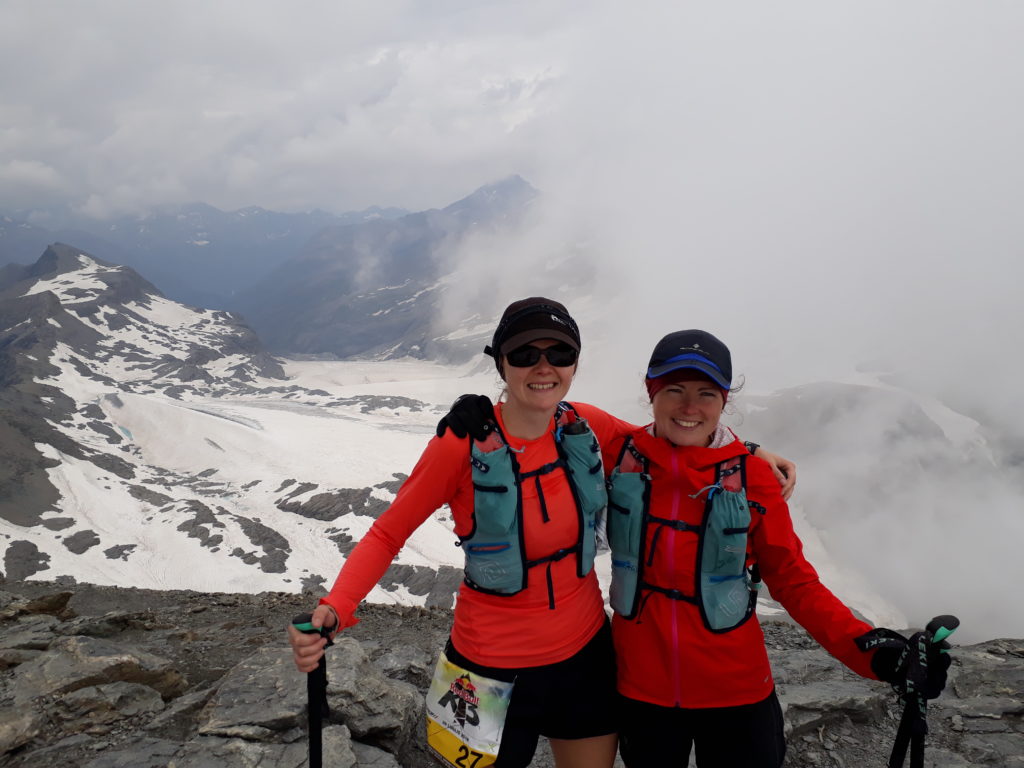 Mirjam and Lenka on the summit

We stayed up there a short time snapping photos and taking it all in before it got too cold and it became high time we head down. The race and the challenge were over, but the descent awaited with thick cloud, thunder and rain. We were glad that waterproof jackets were compulsory kit and whipping the shiny new Salomon jacket and our gloves out, we battled the elements and hurled ourselves down towards the second aid station and then to the car park closer to the first station.

Even though we were mostly running, it took us a while to make the descent. Luckily from the car park we got a ride down the narrow serpentine mountain roads with some very friendly locals, because the organised shuttles were full. 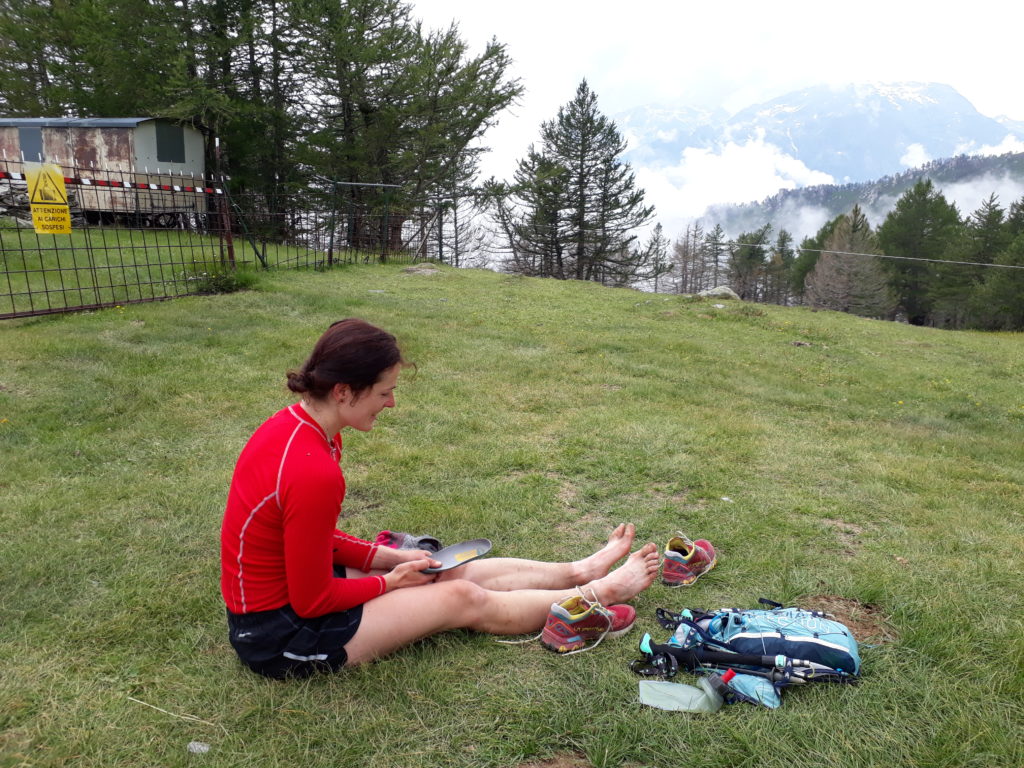 Coming down from the hill waiting for a ride, Lenka post-race

Back down in town it was time for the inclusive pasta party – we were starving! A full plate and a glass of wine made us feel like ourselves again and the challenge we, and all the runners around, had just overcome dawned on us. The men’s winner, Martin Anthamatten (SUI), did it in an unbelievable 2h 5mins, and incredible Victoria Kreuzer (SUI) smashed it again in 2h 23mins with a smile on her face.

Lenka finished the race in 3h 53mins, knackered and ready to roll down the slope. The top runners deserve nothing but our admiration, if you imagine all the hard work, time, pain and commitment put into their training, and all of it shows clearly after having overcome such a hard test. Now, only a couple of weeks later, I just know I’m hungry for more of these races!

Lenka on the summit