Great Britain might not have big mountains but, if there’s a will, there’s a way to pack in all the hills as tightly as possible and provide a race course with no flat sections. This is what we got for the Snowdon Trail Running Challenge – and it was beautiful!

Mostly in hindsight that is.

Driving up to Wales, we were expecting nothing but bad weather for the weekend; the forecast said it, the conditions around us said it, British weather history said it. Pitching our tent at two in the morning in the pissing rain, having just driven all the way from London around closed motorways, was almost second nature.

The sound of raindrops against the tent’s fabric accompanied us in our sleep. Paradoxically a comforting sound. Unzipping the tent in the morning though, we woke up to one of those typical chilly Autumn sunrises, its colours burning bright against the mountains around.

Just over 200 of us set off at 7am to run the half marathon distance. All wearing vests packed with a waterproof layer, water, gels, gloves. We were told not to be fooled by the crisp morning, there was a chance of snow, or at least hail, at the top of Snowdon. And so, following the old railway line, started our way to Snowdonia’s highest peak.

This was what I call a hilly course. There were, quite literally, no flat sections. Over 1,500 metres of altitude gain packed in 24km. I heard one of our fellow runners say she had run a mountain marathon before and that had been easier.

There was lots of climbing, I had to admit. From the moment we started and up to the finish line, the ground had an incline. 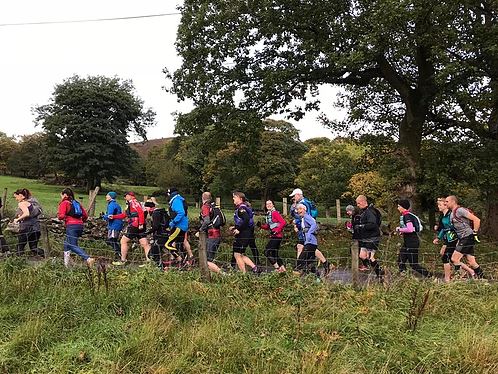 Not even four kilometres had passed when I was forced to start walking, and I continued walking pretty much all the way to Snowdon’s summit. A quick walk that was, with a few hundred metres of running, but a walk nonetheless. Safe to say I lost quite a lot of time here.

The course we followed finished with a nasty sting, increasing the incline grade to 43%. My powerful walk was reduced to hands on knees and heavy breathing. I considered getting my waterproof layer out, as the wind gushed horrendously up there, but decided to suck it up. I used my laziness as an excuse to get back down faster.

A quick stop to let the train through allowed me to catch my breath and prepare for the descend. We were about to lose the 800 metres we had just climbed over the next 6km. I was so looking forward to it!

A couple of jelly babies and three squares of chocolate later, I set off like a mad goat. How much I love technical descents. Happy like a pig in shit, I ran past everyone who had overtaken me on the ascent. Jumping, not paying too much attention to the terrain, almost showing off.

At the bottom, where the course flattened out for a bit and we entered the moors, the singletrail was flooded with last night’s rain. I tried to avoid the water to keep my shoes dry – and therefore light – but after tripping over and covering myself in mud, I gave up.

With little regard to the walkers making their way up, I splashed forward on the trail, happy to be out running in the Welsh countryside. I did thank them for stepping aside though, and always left with a huge smile, which I am sure they appreciated. 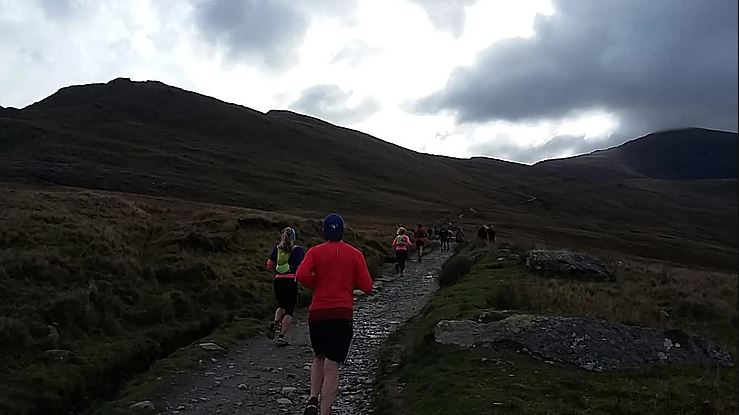 The way up to Snowdon

Then started the demoralising section of the race, where the course wound down to a lake just to follow the same path up again. It was with dread I sped forward, knowing I would have to climb every meter I was just descending again.

After a marshal had marked my hand as proof of my arrival at the lake, I set off again. It was my time to smile apologetically to everyone running down, ‘yeah, same way up again’. I gave a slice of chocolate to one of the marshals guarding the railway line we had to cross, which he accepted with an honest smile.

The course flattened a little and I was able to pick up the pace again. But before I could get too inspired we crossed a gate and there it was, the next hill to climb. Looking up, I could clearly see the outline of all the runners ahead; so much higher than me, moving painfully slow.

“The fun continues this way,” said a marshal after seeing the expression on our faces. Yes, thank you master of irony. Step by step I climbed the hill. Just to find out that there was another hill after it. And another behind it. And yet another after that.

Everyone was walking at this stage. If I hadn’t been before, I was definitely glad now that I chose to run the half-marathon instead of the 42km. My legs burned, I felt them shaking every time I let my weight fall on one to push my body upwards.

I tried to be nice and praise the guy who had just overtaken me, but I didn’t manage more than two words. The guy ahead of me was on all fours. The wind made my eyes water and deafened the sound of my heavy breathing. I used the views, which were indeed magnificent, as an excuse to stop moving for a second and recover.

After a hard push came the last summit, and with it renewed energy. I was having a wonderful conversation with James, who was also running the half marathon, and we couldn’t believe how well we felt! We stormed downhill together, as if this was only the start of the race, the last 20km seemed forgotten.

It was a beautiful course, all of it following trails, no tarmac involved. Absolutely fantastic. Lenka smashed the race with a podium finish – again – with a time of 2:59:56, finishing 3rd woman and 12th overall. On my side, a time of 3:23:33 got me down as the 13th woman, 48th overall. 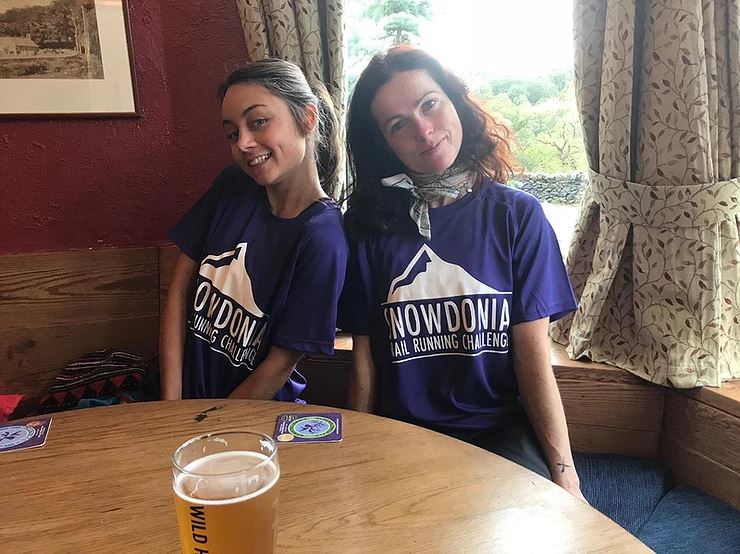 We are incredibly grateful to everyone at Trail Events, the race organisers, the course setters and the marshals, thank you for putting up such an amazing race – a true Trail Running Challenge!